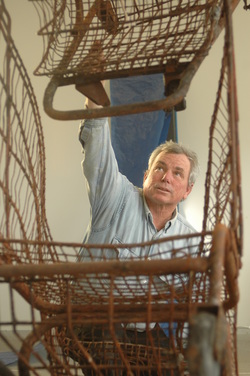 Alan Hopkins graduated with a Bachelors of Fine Arts Degree form the San Francisco Art Institute in 1976. In 1978 was a founder of the San Francisco Christmas Bird Count and remains a compiler. Was president of Golden Gate Audubon Society (GGAS) 1998 - 2000. He Created the Save the Quail Campaign in 1998. He represented GGAS in reviewing plans for Crissy Field, Heron’s Head Park, North Lake in Golden Gate Park in San Francisco. Alan was the Naturalist in Residence for the Shipyard Trust for the Arts at the Hunters Point Shipyard, San Francisco, He is teacher for the Kids In Parks program at McLaren Park and San Francisco Nature Education at Heron’s Head Park. in San Francisco. Alan is a monitor for NOAA’s Cordell Bank Ocean Monitoring Program, Marin. His chapters on Bay Area birds are published in:100 Birds of Heron’s Head, A Birders Guide To Metropolitan Areas of North America and San Francisco Peninsula Birdwatching.. His photographs have appeared in :Images of America, San Francisco, A Natural History, A Birders Guide to Metropolitan Areas, Ocean Birds of the Nearshore Pacific and in periodicals such as: American Birds, Bay Nature, Birding, California Wild and Western Birds. While deeply involved in conservation issues Alan took a hiatus from art making, however he is now creating new art that is informed by his work with birds and conservation. He was awarded the Shipyard Trust for The Arts Artist in Residence in 2010. Hopkins received the Crissy Field Center’s Community Hero award in 2004 and the Elsie Roemer Conservation Award in 1996.